Posted on
June 13, 2022
Written by
Joanne Leclair (About the author) , Language Portal of Canada 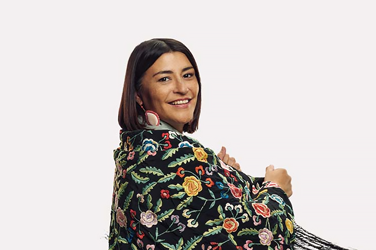 In honour of National Indigenous Peoples Day, we would like to introduce you to Inuk singer-songwriter and producer Elisapie Isaac. When we met her during the Rendez vous de la Francophonie in March, she told us how the different languages she speaks inspire her and introduced us to the artists who have influenced her. Here’s a glimpse into her creative universe.

When she was very young, Elisapie’s parents decided that she would learn French. She fondly remembers her elementary school teachers, who shared their passion for the language. Today, she lives in Montreal and speaks French by choice, out of love and out of respect for those around her.

“I speak French out of love and out of a desire to connect with others. It’s not just about the language for me. Language brings with it enormous breadth and culture; it expands my world. I love speaking French. I love the different possibilities the language has to offer, because that’s all I want to do, express myself! It’s like I can never express myself enough! It’s a yearning, a visceral need that is part of my personality. Speaking Inuktitut, French and English allows me to play with words. All the vocabulary that is available to me allows me to better express myself.”

The philosophy and culture behind Indigenous languages

If you want to learn an Indigenous language, Elisapie suggests you start by learning more about Indigenous Peoples and communities across Canada. She believes that learning a new language requires human interaction and cultural immersion. Elisapie also stresses the importance of humility, curiosity and the desire to connect with others. She explains that real human connection and knowledge transfer are essential to learning a new language.

“To be honest, learning Indigenous languages is challenging. It is far more meaningful and important to build relationships with people than to learn the language.... Just start by becoming aware of Indigenous culture and philosophy. For example, learn about the nation that lives where you grew up. I think that would be a good start.”

On her latest album, Elisapie sings mostly in Inuktitut, but also in English and French. Emotion drives inspiration, and Elisapie instinctively knows which language to use to express intensity, turmoil or tenderness. Allowing her instincts to guide her, she moves from one language to another with ease. Each language has its own unique purpose and energy. At first she found it difficult to blend pop music and Inuktitut, but over time she has found a comfort level and struck a balance between rhythm and language. She feels that French offers a more structured way of creating.

“I find French very complex. I’m instinctive, but it quickly becomes very clear to me what the subject is and which audience I want to reach. For example, in my French song Ton vieux nom, co written with Natasha Kanapé Fontaine, I felt the lyrics were for Quebec and French-speaking audiences. They were the ones I wanted to speak to and reach out to. The song provided a space for dialogue with the people that know me and that I interact with every day.”

The singer-songwriter doesn’t spend hours thinking, with pen in hand. She admits that she creates instinctively, letting herself be carried away by what she’s feeling at that very moment. Her songs take shape in the language that emerges.

“When I write, I ask myself: ‘Does it come out naturally in English, French or Inuktitut?’ I rely on instinct to tell me which language to choose. Lately, I often write in English or Inuktitut. These languages offer me a range of emotions that I find easier to make my own, a wider universe perhaps.”

When asked which writings or literary figures have influenced her life, the singer-songwriter took a moment to consider. “There have been so many!” The first person she names is author Frank McCourt, whose autobiographical writings caught her attention. In reading his work, Elisapie clearly saw a connection between the life McCourt describes and the lives of Indigenous Peoples.

“I felt like I could understand who the Irish were. This is an author who writes about poverty and his dysfunctional relationship with his alcoholic father, but he writes with a lot of humour at the same time. For me, it was like reading the words of an Indigenous writer who is also trying to survive in the dysfunction but who has a good head on their shoulders and the strength of mind to say, ‘I’m going to get through this, I’m going to find a way.’”

Elisapie then mentions Joséphine Bacon’s poetry, which moves her deeply and brings her a sense of peace. She considers the poet from Pessamit, Quebec, to be a wise woman. She is particularly fond of works that pay tribute to the Innu territory and loves those that deal with aging and the passage to the status of Elder.

“I think that anyone who is aging should read Joséphine Bacon because there is an incredible fear of aging in society. For Indigenous Peoples, it’s the opposite. There’s something beautiful about surrendering to time, becoming wise, guiding others. It’s a wonderful role that is given to us. I feel that we should all learn from Joséphine Bacon … She’s had a big impact on me.”

Another work that has moved Elisapie is L’énigme du retour [The Return] by Danny Laferrière.

“I felt like he was telling my life story. He speaks about exiles, but sometimes we can feel like exiles here in our own country.”

We encourage you to read or reread the post Elisapie: A woman who cherishes tradition, which shows another side of Elisapie Isaac, and to keep up to date with Elisapie, an artist whose creative universe touches people from different backgrounds. 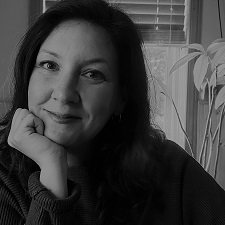 Joanne Leclair is a communications officer with the Language Portal of Canada. She is a seasoned self-starter with more than 20 years experience in business management and will jump at any opportunity to learn and let her creativity flow. She is a member of a fantastic team at the Portal, where she coordinates the Our Languages Blog and contributes to various promotional projects. She is passionate about books, nature and chocolate, but not necessarily in that order.