Posted on
November 19, 2018
Written by
Nicolas Viau (About the author) 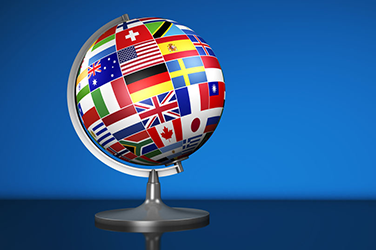 What if you could communicate in a fair way with people who don’t share your native language, while promoting linguistic diversity? That’s the goal of Esperanto. It’s a constructed language, which is to say, a language designed through a conscious process.

The story of Esperanto began when Ludvik Lejzer Zamenhof published the foundations of the language in 1887. Hailing from the city of Białystok, located in what is today eastern Poland (and was at that time part of the Russian Empire), Zamenhof, an ophthalmologist by trade, set out to create a language that would make it easier for people from different cultures to communicate and thereby settle disagreements. In particular, he was influenced by the less than harmonious relations between the Jewish community (of which Zamenhof was himself a member) and the Russian, Polish, German and Belarusian communities that lived side by side in his hometown.

Esperanto’s vocabulary is essentially taken from European languages. However, what makes the language so accessible is its very regular and essentially exception-free grammar, which allows each new concept learned to be generalized throughout the language. Creating new words and concepts is very easy, which makes Esperanto highly adaptable to a changing world. These features can also give learners of the language increased confidence in their learning abilities.

Here are a few examples of word creation using common prefixes and suffixes:

A fair language, a bridge between cultures

How to overcome the language barrier is a problem as old as humankind. As any learner of a second language knows well, it’s more difficult to function in that language than in one’s native language… Hence the idea of an auxiliary communication language that’s easy to learn and “neutral,” in the sense that it’s (virtually) nobody’s native language and therefore belongs to no one. (In fact, it belongs to everyone!).

From constructed language to living language

But isn’t Esperanto an old utopian idea straight out of the 19th century? Quite the opposite: it’s a living reality, involving very diverse people throughout the globe: families, musicians, writers, computer scientists, and many more. Esperanto today is a language used in person as well as on the Internet, which has in fact given it a new lease on life. Online projects abound: see for instance the Esperanto version of Wikipedia.

Esperanto involves congresses and meetings every year on all continents, a network of people willing to host travelling Esperanto speakers from around the world (Pasporta Servo)… There are also numerous books in Esperanto (translated or original works), poetry, music…

I’ve long been interested in languages, as well as in the balance of power between them. I found the concept of using a neutral language for greater equity to be quite interesting, and since I was also curious about learning a constructed language, I decided to learn the basics of the language in 2009. I quickly acquired a reasonably good ability to understand the language, but the real “revelation” came when, in 2013, I participated in my first large Esperanto event, in Slovakia. I had lots of fun there and made many new friends, all in Esperanto! When I came back to Montreal, I decided to become more involved in our local Esperanto activities.

I like the feeling of freedom from what could be called “normal” language conventions. Esperanto is a linguistic common ground which allows everyone to be themselves in an interaction, outside of hierarchical relations between languages and cultures…

And a “human experiment,” in the sense of “something whose result is not known.” Esperanto is a unique, large-scale experiment involving people from all walks of life, who have learned it to help them communicate over the language barrier.

Montreal at the heart of the Esperanto world in 2020

Esperanto is alive and well in Canada too! Regular meetups take place in several major cities, including Montreal, Toronto, Ottawa and Quebec City.

The World Esperanto Congress is held every year in a different city and country. Montreal will host the 105th World Congress in 2020 (from August 1st to August 8th) and will therefore become, for a week, the centre of the Esperanto-speaking world … which leaves you more than enough time to learn the language!

I look forward to seeing you at the World Esperanto Congress in 2020!

This is fascinating and worth

This is fascinating and worth investigating, especially for a (linguistically) diverse country like Canada. I hope that the Language Portal can flesh this out with more information on this relatively neutral, constructed language.

I'm so excited to see

I'm so excited to see Esperanto talked about on my own government's website. I'm even more excited about attending the world congress meeting right in my own country. I've been studying Esperanto for almost 3 years and have loved every minute of it. I've even created a website called Langful (https://langful.com/esperanto/lessons), which is dedicated to teaching Esperanto. Hope to see everyone at the congress in August 2020.

Another advantage of Esperanto is that it allows you to escape the "tyranny of a single implementation."