My love for translation, interpretation … and Acadia

Posted on
January 28, 2019
Written by
Sandy Harquail (About the author) 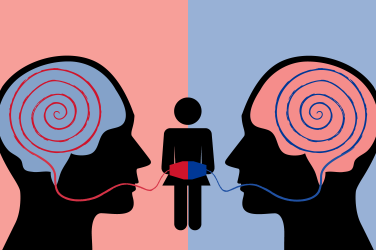 I’ve known from a very tender age that being bilingual is a privilege. My mother’s family is Francophone; my father’s, Anglophone. And let me tell you, family visits were quite interesting, particularly with my cousins’ non-existent French and our garbled English. I think that’s when I first began to dream of becoming a translator. Not because I love words (as I often hear others say when they’re asked “Why translation?”), but because I love communication. To me, it’s vital that the message be understood on both sides of the invisible but very real language barrier.

So now, at age 51, I’m in my second year of translation studies, and I love it! Even when my marks aren’t as good as they should be, even when I have to study until midnight on weekdays, I LOVE IT!!! Going back to school hasn’t been easy, but thanks to my young friends, it has been much easier than I thought it would be.

At the University of Moncton, young people come from all over the Francophonie, including Africa, Europe, Quebec (students from Quebec get to shave a year off their studies) and New Brunswick. It’s very interesting to hear the din of conversation between classes, with all the varieties of French being spoken.

To give you some background, I spent my childhood in the Outaouais region and then moved to Montréal when I was 12. Nearly 20 years later, I decided to relocate to New Brunswick. So my linguistic heritage comes from two distinct regions: the Outaouais and Montréal. Nothing prepared me for Acadian French, and I must say that I fell in love with Acadia, with the people and with the language, which is very rich and colourful. I love the Acadian accent, which differs from one region to another. Its lilting cadence and archaic words make for some amusing conversations at times.

Here are some examples of words that surprised me the first time I heard them:

For more words, see the Glossaire acadien by Pascal Poirier, which is available for free on the Internet (in French only).

We should never be afraid to ask for clarification about things we hear people say, because it can lead to some very entertaining stories. I’m very happy to be living in an Acadian environment. I’m taking advantage of this opportunity to learn a variety of French that has managed to survive over the centuries (Acadians have been here for more than 400 years).

But to get back to what I was saying, although I have Québécois roots, I’m an Acadian at heart, and my love for the language just keeps on growing. I’m studying to be a translator, but I’m not much of a purist, which will cause me problems (I’m sure of it!). Right now, I’m still learning. Actually, I’d like to be an interpreter, since I’ve had several opportunities to interpret from Spanish to English and from Spanish to French, as well as from English to French and from French to English. I was always keenly aware that the message (the content) was what was most important, not necessarily the words. I had to stick as close to the meaning as possible and act as a bridge between two worlds that couldn’t understand each other.

Translating orally from one language to another is such a wonderful profession! I don’t like to say “interpreting,” because the meaning might be misunderstood: we don’t interpret words, we deliver the message in another language. But, in fact, that’s what interpreting is, so who am I to change the name of such a beautiful profession? Wish me luck in my studies, and tell me if you have any funny stories about your experiences with a variety of your language. 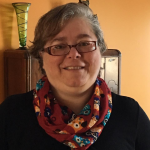 Sandy Harquail is a poet and writer. She has had a passion for words from a very young age. Many of her poems have been published in poetry collections, and two of her children’s stories are being considered for publication by a publishing house in Moncton. She is in her second year of a bachelor’s degree in translation.

do you have a English to

Do you have an English to Acadian translation? I only speak English, but my partner is from Moncton, and I would like to learn a few words for fun to tease him.

Hi, Natalie,
Unfortunately, this post is available in English and French only. But there a many resources available online. Just do an Internet search for “Acadian expressions.”