Are you a multilingual speaker? 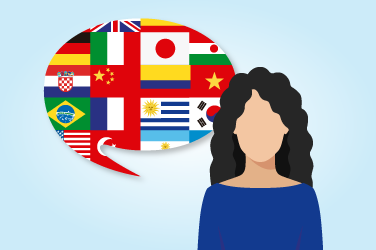 “How many languages do you speak?”
“Do you consider yourself multilingual?”
“What does multilingualism mean to you?”

These are three of the questions I asked participants in a survey last year. It was part of a study on multilingualism in which I participated as a researcher and which was led by a professor at the Official Languages and Bilingualism Institute (OLBI) of the Faculty of Arts at the University of Ottawa.Footnote 1 These questions seem very simple and straightforward, yet different participants gave different answers. In Canada, less than 20% of the population can speak the two official languages.Footnote 2 Should these people be defined as bilinguals? I think so. So, are bilinguals also multilingual?

At the individual level, multilinguals are defined as people who use two or more languages. However, this definition is not universally accepted, and some linguists, in order to distinguish bilinguals from multilinguals, argue that a person needs to be able to speak three or more languages to be considered multilingual.Footnote 3 In defining multilingualism, there is also a question of how effectively speakers use their languages. In other words, what level of proficiency does the speaker need to achieve? Different language assessment systems give different answers, but the Canadian government considers that a person is bilingual when they can carry on a conversation in their second language.Footnote 4 This corresponds to the so-called A levels in the Common European Framework of Reference for Languages (CEFR) (opens in new tab) (PDF).

In societal terms, multilingualism is often described as the use of more than one language (more than two if you want to distinguish it from bilingualism) in a community or social group. Often, this multilingualism is attributed to immigrants from different cultural backgrounds, especially first-generation immigrants. So in Canada, many communities can be seen as multilingual because we are working hard to create a multicultural social environment. Even though there can be prejudice against a particular language, I believe that we should try to maintain as much linguistic diversity in our communities as possible, as this will make our society more culturally inclusive.

“Institutional multilingualism” refers to the use of two or more (or three or more if you want to distinguish it from bilingualism) languages in an organization, which may sometimes be supranational (for example, the European Union or the United Nations). However, when multiple languages are spoken within an institution, the appropriate supports need to be set up. In the United Nations, there are six official languages.Footnote 5 These languages are widely spoken, but interestingly, the reasons why some of them were chosen may have to do with the historical participants in World War II. Similarly, there are also many historical factors in Canada's adoption of English and French as the country’s official languages, and, in my opinion, Canada has made a relatively sound decision on this point.

In my previous survey experience, I found that some participants expressed concern that having learned an additional language might lead to a decline in native language proficiency. Taking together the results of several linguistic studies,Footnote 6 I concluded that although some degree of native language attrition may occur as people learn additional languages, this effect does not significantly affect language learners’ language use, and the main predisposing cause of the negative effect might be a decrease in the frequency of language use. Children who are exposed to two or more languages at birth may lag behind monolingual children in both languages for a short period of time, but this discrepancy usually disappears quickly.Footnote 7 Therefore, I believe it’s worthwhile to protect Canada’s minority languages and to encourage future generations of immigrants to learn the language of their culture. Language symbolizes a culture, and acquiring the language of one’s ancestors usually increases one’s sense of identity.

You’ve read this far, and I assume you already have an initial understanding of multilingualism. So, finally, I’d like to ask you, do you consider yourself multilingual? If not, are you interested in learning an additional language?

Coulmas, F. (2018). “Multilingualism is …: Twenty definitions and more.” An Introduction to Multilingualism: Language in a Changing World, 25–42. Oxford University Press.

See the article “Second Language/Bilingualism at An Early Age with Emphasis on Its Impact on Early Socio-Cognitive and Socio-Emotional Development. (opens in new tab)”

Hello! Thank you for your

Hello! Thank you for your article. I find the multilingualism definition you provided very helpful.

To answer your question, I consider myself multilingual, certified in two languages English and French, Bulgarian being my native language and learning on my own Spanish language (not tested).

Regarding level of proficiency, I only become confident in my foreign language knowledge when I start thinking in that particular language.

Thanks for your article. In

Thanks for your article. In my opinion, most of the people's second language is English in China.

Interesting article but not

Interesting article but not sure the difference between Bi and Multi needs to be argued...Bi means Two and multi means many...so if you are bilingual you speak two languages proficiently or sufficiently and if you are multilingual then you speak more than 2...right?