Taking the plunge into your second language

Posted on
March 15, 2021
Written by
Steven MacKinnon (About the author) , Parliamentary Secretary to the Minister of Public Services and Procurement

I grew up in the 1960s and 1970s in an English-speaking family in Charlottetown, Prince Edward Island. Back then, everything was done in English: reading, writing, school, etc. Today, in the 2020s, I’m raising my children in French in Gatineau, Quebec, where I’m the federal Member of Parliament.

The road to the Francophonie

My love for the French language began when I was seven. My mother was a public servant then and was taking courses in French. I’d see her studying and making an effort to speak French. That was all that was needed to pique my curiosity. I asked my parents to enrol me in a French immersion program. But it was only at the age of 17 that I really took the plunge by deciding to attend a Francophone university, the University of Moncton. At that time, Prince Edward Island was in the midst of a little wave of Francophone immigrants because the Department of Veterans Affairs had moved their headquarters to Charlottetown. Since then, you might say that I’ve lived my life in French.

When I finished university, I was fortunate enough to work with Frank McKenna, the former premier of New Brunswick. Since I was responsible for all matters relating to the Francophonie, I took a keen interest in anything that affected Francophone minority communities. This is a topic that’s still close to my heart today.

Proud ambassador of the Language Portal of Canada

Now, as Member of Parliament for Gatineau and Parliamentary Secretary to the Minister of Public Services and Procurement, I take advantage of every opportunity that comes along to promote our two official languages. That’s why I became an ambassador for the Language Portal of Canada (opens in new tab), an initiative of the Translation Bureau. The Portal provides useful language resources that will help you express yourself more effectively in both official languages. These resources are a great help to people like me who often switch from one language to another.

In today’s society, the pace of communications is continually increasing. The last year has been no different. The tools on the Language Portal, including the Glossary on the COVID-19 pandemic (opens in new tab) and the Vocabulary on distance teaching and telework (opens in new tab), are therefore very useful. I encourage all Canadians to visit the Portal to explore its content and perfect their language skills.

The presence of a variety of languages and cultures is one of our country’s most valuable assets. I often say that Canada is a multicultural nation where English and French co-exist with many Indigenous and foreign languages! Learning a second language made me fully aware of how important an asset linguistic diversity is.

Have you taken a similar plunge into your second language? Tell me about your experience. Let me know how linguistic and cultural diversity contributes to your identity. I look forward to reading your comments! 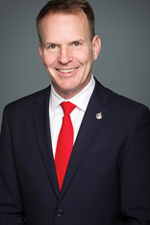 Steven MacKinnon is the Member of Parliament for Gatineau, Quebec. Since January 2017, he has also been Parliamentary Secretary to the Minister of Public Services and Procurement. Mr. MacKinnon is a staunch advocate for Canada’s two official languages.

Thank you for sharing the

Thank you for sharing the story of your French language learning journey. I am multilingual, but unfortunately, French is not one of the languages I know. I appreciate the Language Portal of Canada and the resources provided. French is a language I would like to learn and be able to communicate in, and so, it is in my learning plan.

I immigrated to Canada in the late 90s from South East Asia and had no knowledge of French at the time. Growing up in a different country, where many different languages are spoken, I was fortunate to have learnt them. It was several years after I joined the public service that I thought it would be great to know French. I am originally from British Columbia, and there were not many French speakers at the office at the time.

I moved to Winnipeg about three years ago, and there are quite a few French speakers at my new office. I appreciate them taking the time and having patience to answer my questions about French. I even got to the point where I would be asking for new words or phrases on a regular basis. It is not an easy language for me to learn but I am determined to achieve my goal. I am looking for different options available to me and hope to let you know one day that "I know French now!!!!"

Thank you for your time and letting me share my short story.