Language: A bridge between people 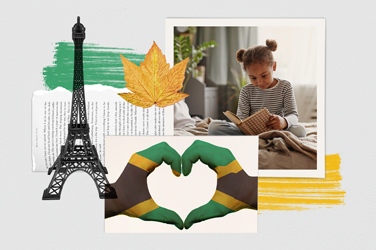 My mother tells me that my love of languages started in utero. While she was pregnant with me, she had a vivid dream that she was having a girl who would have a passion for languages. My parents then insisted that I should have a French name, and I was named for the actress Yvette Mimieux, whom my parents had recently seen in a movie.

My introduction to French and other languages

True to my mom’s intuition, I became an early and voracious reader, and I was quickly intrigued by the labels on the objects around me. I discovered that my Corn Flakes cereal box read flocons de maïs in French! I was also fascinated by the few French phrases that my mom remembered from high school that she loved to teach me (for example, Ferme la porte, bébé!). It wasn’t until I was in junior high school that I began to formally learn French, and then I became hooked! I continued to study French in high school and university, including doing a semester in France, and I never lost my appreciation for la belle langue. Along the way I studied German, Spanish and Russian, and picked up a little Japanese, Italian and Mandarin for tourists, which served me well during my travels.

Jamaican patois as a distinct language

What intrigues me about language is that it allows us to show respect for the cultures and people we encounter, and that it can be a living thing that evolves over time. My family is from Jamaica, where patois is commonly spoken and has developed over 400 years. “Patois” translates to “rough language” in French, and children weren’t allowed to speak it in school as it’s considered to be informal. But Jamaican patois is also part of the cultural fabric of the country, and it crosses age, ethnic background, gender and socioeconomic lines to unify Jamaicans. It originated in the 17th century, when enslaved people who were taken to Jamaica from Central Africa and West Africa incorporated words from African and other languages into English to form a secret way of communicating with each other. Now, because of the global impact of Jamaican music and culture, patois is being studied more closely, and sociolinguists are finding that patois has roots in Twi, Creole, Spanish, Hindi and other languages. So now, when I leave the house, instead of saying, “I’ll be back shortly,” I’ll say, “Soon come” in patois, and it makes me smile and feel closer to my family and to Jamaican tradition.

More recently on my language journey, I discovered something new: linguistic insecurity. Yikes! It can happen when you’re new to learning a language or when you know that you don’t have a great ear for a certain language. Or, for me, the challenge is maintaining my French language skills here on the West Coast, where it’s so much more common to hear Mandarin or Cantonese or Punjabi while out and about in Vancouver. But I persevere, and I remain committed to maintaining my language proficiency, even if it has become more challenging than in my university years.

Meanwhile, I’m now in my second year as an employee at Public Services and Procurement Canada, and I'm thrilled to work in the federal government department that is home to the Translation Bureau. Aside from the fact that I once aspired to be an interpreter (inspired by the historical figure Mathieu Da Costa), I also consider it to be serendipitous to be in a department in which the culture supports and celebrates official languages. Even better, I came to learn that the Translation Bureau also offers translation into Indigenous languages, as well as American Sign Language (ASL) and Quebec sign language (LSQ) interpretation. This speaks to my personal values of inclusion, accessibility and cultural connection through language.

The latest challenge for me was to learn a few phrases of welcome in ASL for National Public Service Week. As always, it was humbling to be a new learner, but I was also excited to discover a wonderful new world of communication with my staff.

The message I hope to leave for readers of this blog post is that it’s never too late to start learning a language and that languages can open doors to a fascinating world, just waiting to be discovered! Which languages would you like to learn and why? Let me know in the comments!

Merci pour ce superbe billet de blogue Yvette-Monique. I enjoyed learning about your family and early interest for languages. And because of your blog, I will do some digging on Jamaican Patois... Thank you for accepting to be the recipient of the Golden Quill in 2022... you killed it!

So many fascinating nuggets

So many fascinating nuggets of information, skillfully woven into such a short but interesting piece. Big up yourself, Yvette. Walk good. (Meaning: Congratulations. Best wishes).

This is amazing, Yvette! I

This is amazing, Yvette! I have a hobby of learning a few words in many languages, which works out to be a great ice-breaker when I meet new people! I am so impressed that you can carry on conversations in many! Thank you for sharing! Votre blogue est un rappel inspirant de la valeur de l'apprentissage et de la motivation à inclure tous les Canadiens dans la conversation !