Food for thought: Exploring the origins of culinary terms

Posted on
October 30, 2017
Written by
Marc-André Descôteaux (About the author) , Language Portal of Canada 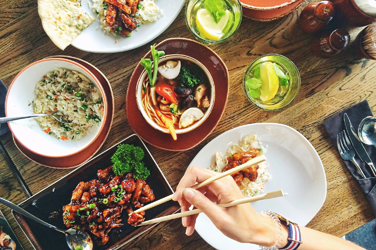 At an Indian restaurant, I’m transported by the tantalizing spices and tasty dishes. When I eat out Italian, I savour the rich and creamy sauces. In Japanese cuisine, I’m amazed by the visual presentation of the dishes. If you’re like me, flavours, aromas, textures and colours take you away. But how many of us realize how far the vocabulary of food has travelled?

Here are a few examples of English food terms borrowed from other languages. Some might surprise you…

From Canada’s Indigenous peoples, English borrowed words such as “saskatoon” berries and “pemmican” (dried meat mixed with fat and berries), as well as the names of animals enjoyed for their meat, like caribou, moose, sockeye, muskie and geoduck.

English words used in other languages

If English has borrowed food-related words, then you can be sure that English food terms have found their way into other languages as well. Take the humble sandwich: its name is well entrenched in French, Italian and Spanish!

And who hasn’t heard of expressions such as “apporter son lunch,” “prendre un cocktail” or “préparer des muffins” in French? Terms like “hamburger,” “bacon” and “fast food” are also well known to Francophones.

Food is even the basis for many English idioms. Have you ever wondered why there are so many expressions with the word “salt”: worth one’s salt, take something with a grain of salt, the salt of the earth? In ancient times, salt was highly valued and was used as an item of trade and a form of currency.

To finish off, how about trying a food-themed quiz? I’m sure the Language Portal of Canada’s quiz Food clichés 1 will whet your appetite. You can find the “Food clichés” series in our quizzes on vocabulary, under Idiomatic expressions.

Now, it’s your turn to make our mouths water. What are your favourite culinary words and expressions? Which ones make you chuckle? Share your thoughts in a comment! 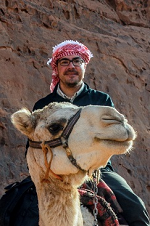 A translator and reviser for about 20 years, Marc-André Descôteaux has been interested in the web since the days of the 2400-baud modem. Insatiably curious, he is passionate about culture, travel and language. He is delighted to contribute to the Language Portal of Canada team.

Amuse-bouche ... "These, often accompanied by a complementing wine, are served both to prepare the guest for the meal and to offer a glimpse into the chef's approach to the art of cuisine. The term is French and literally means 'mouth amuser'." --- Wikipedia

Thanks for sharing your favourite culinary expression. I often use "amuse-gueule," but "amuse-bouche" must taste good, too!

In México we use the same

In México we use the same expression "make your mouth water". Where the word "smorg" come?

Thanks for sharing. By “smorg

Thanks for sharing. By “smorg,” did you mean “smorgasbord”? According to my research, the origin of “smorgasbord” is Swedish. A smorgasbord is a buffet-style meal made of hot and cold dishes.

In Mexico the word POSTER is

From the French list: mutton, pork, poultry, venison - much of this came onto English with the Normans - just a bit of "social cachet" for the sheep, pigs, birds and deer we'd been eating (and now off our diet?)

In 'English words created in

In 'English words created in Canada', you might include a medium-length list of Canadian place names. Not so much because it's your subject matter, as because you otherwise end up leaving aside that important set of "borrows'. Just an idea.

Hello, I believe the word

Hello, I believe the word chocolate came from Mexico as a Spanish word as well. Would be interesting to add this word to your list. Thank you.

Thanks to all for your

Thanks to all for your additions.

Keep them coming! Your suggestions are all so interesting!

The spellings we’ve included in our post are English spellings, which explains the differences you noted. Some of the languages we borrow words from have letters or sounds that are different from ours, so borrowed words are often adapted in some way over time.

the name of fruit avocado is

the name of fruit avocado is not spanish, it is nahuatl (aborigina mexican central).In spanish is aguacate.
the mayonnaise is original of a spanish island, Menorca. the real name is mayonesa.

You’re right that the origins of the word “avocado” are not Spanish. Our post lists the languages from which English has *borrowed* food terms, and those languages may not necessarily be the language from which the word originated.

Let’s take your example of the word “avocado.” Spanish borrowed it from an Indigenous language of Mexico in the 16th century. But English did not borrow it from that language: it came into English from Spanish in the 17th century. So Spanish is the language listed accurately as the source of our borrowed word.

We’ve made some changes to the post to make it clear that we’re referring to the languages from which English has *borrowed* words, not necessarily the language from which the word *originated.*

While there seems to be some debate about the origins of the word “mayonnaise,” one side of the debate does suggest that the condiment is named after the Port of Mahon on the island of Minorca. However, English borrowed the word from French.

Is 'maize' not a word native

Is 'maize' not a word native to the American continents (either or both)?

Note that our post lists the languages from which English has *borrowed* food terms, and those languages may not necessarily be the language from which the word originated. We made some changes to the post to clarify that point.

Donair is also Turkish. It

We use words for foods

We use words for foods borrowed from Indigenous languages too. The famous East Coast jumbo clams - Quahaugs, is a Mi'kmaq word, as is the star of the Canadian quarter, the Caribou. "Caribou" was loaned to English from French, who had already borrowed it from Mi'kmaq. That's Canada!

I was born in Québec and my

I was born in Québec and my mom used to say “galimafré” for any kind of hash in cooking. I found out much later that the word was English and was spelled gallimaufray. Where she got that word from remains a mystery to me!!

The term “smorgasbord” has

The term “smorgasbord” has also been adopted into English use, but its meaning has sort of lost its way. It has become synonymous with “all-you-can-eat” due to most buffets being “unlimited,” but literally translated from Swedish, it simply means “sandwich table.” (Smorgås + bord = sandwich + table)

Poor island-dwelling Albion! His indigenous food [Paper thin slices of bread, with or without anything in between, with the nomenclature of 'sandwich' is touted as the best specimen of English food] is the worst in the world. That he copies the recipes and purloins any food item from around the world is a matter of survival for him. It's another matter that he changes the spellings, pronunciations, ingredients, tastes and presentations! No perfect copycat is he. Want to eat well? Come to Canada. For culinary excellence, the whole world congregates here. Bon appétit!

Come to France, dude! Go eat at a 3-star restaurant once in your life in Paris or another beautiful place we have. You'll never forget it, I promise! (Never been to Canada, although I'm pretty sure it's similar. We have so much in common. :) )

"Bacon" was originally an old

it's a good article,

it's a good article, well I have homework to write same theory with article which is borrowing word. Can you give some recommendation dictionaries to find the meaning of each word? thanks..