A conversation with Patrick Chan and Caroline Savoie, spokespersons for the 2019 Rendez-vous de la Francophonie

Posted on
January 14, 2019
Written by
Marc-André Descôteaux (About the author) 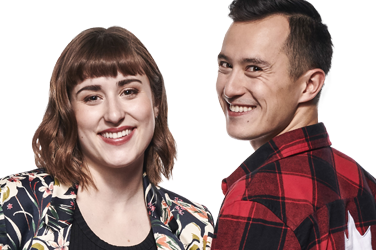 Youth, energy, the arts … and the French language. That’s what unites the two celebrities chosen as spokespersons for the 2019 edition of the Rendez-vous de la Francophonie (RVF). Caroline Savoie is a singer-songwriter from New Brunswick who already has a few albums to her credit. Patrick Chan is an Olympic figure skating champion who was born in Ontario and currently lives in British Columbia. We interviewed them to help you get to know a bit about them and to share their perspectives on Canada’s official languages.

Our Languages blog (OLB): Caroline, you were born in Fredericton but grew up in Dieppe. What does being Acadian mean to you?

Caroline: I lived in Fredericton for the first four years of my life. Because most people speak English there, I was already bilingual by age three. At four years old, I was reading in English and French. When my family moved to Dieppe, my French (which is my mother tongue) really blossomed. For me, being Acadian means continuing to speak French, despite being surrounded by English.

OLB: Patrick, you’re not “just” bilingual: you speak English, French and Cantonese. What was it like growing up with three languages?

Patrick: Challenging! At home, my dad spoke to me in French, and my mom, in Cantonese. I learned my third language, English, with my friends and at the skating rink. Three different languages means three different ways of expressing yourself and communicating. My mom said that, when I was a baby, it took me a long time to learn to speak. My brain was just trying to process the languages and categorize them. But once I got past that, it made things very exciting! I would sometimes share “secrets” with my dad in French so that my mom wouldn’t understand. But then my mom started learning French just from hearing it all the time!

OLB: Caroline, you spent quite some time in France when you were a contestant on the television show “The Voice, la plus belle voix.” Did you experience any memorable or comical situations because of your accent or vocabulary?

Caroline: Oh, yeah! When I auditioned, they used subtitles whenever I spoke! When I saw the subtitles on television, I said to myself “You've got to be kidding!”, because I had made a real effort to speak clearly while keeping my accent. Later, I found out that it was standard practice to use subtitles with anyone who didn’t have a Parisian accent. For example, on a Paris TV program, someone from Marseille might be subtitled, too.

OLB: Patrick, knowing three languages also means knowing three cultures. Do you prefer to do certain things in English and others in French or Cantonese?

Patrick: I love reading and watching movies in French. When I have a choice between English and French for a book or movie, I always try to choose French.

OLB: Caroline, you sing in both French and English. How has being bilingual helped your musical career?

Caroline: It’s cool to sing in both languages, because it allows me to sing anywhere. I’ve sung in Toronto as well as Montreal. I’ve participated in bilingual festivals where I sang half of my songs in English and the other half in French. I’ve even sung in French in front of a mostly Anglophone audience, explaining to them in English the messages in my songs. I try to connect with people, to draw them in. It might even encourage some of them to learn French!

OLB: Patrick, people describe the Francophonie as a big family. Have you felt a certain kinship with Francophone athletes you’ve met at Canadian and international competitions?

Patrick: Yes, absolutely! It’s helped me forge bonds. When I started improving as a skater and competing more, skaters from Quebec were pleasantly surprised to learn that I understood French. At international competitions, at first, I was afraid I would be isolated, without any connection to the other skaters. But the French language really helped me feel that I was part of the community, not just the Francophone community, but also the skating community.

OLB: And to wrap up, what does being an RVF spokesperson mean to you? In your eyes, why is this role important?

Patrick: For me, it’s important because I want to continue growing as a Francophone in Canada. The French language has been a part of my life since I was very young. I also want young athletes and the general public to remember that the world of sports involves Francophones as well as Anglophones and that being bilingual opens doors for the future.

Organized as part of Francophonie Month, the Rendez-vous de la Francophonie will be held from March 1 to 31, 2019. We invite you to join in events taking place across Canada and to participate in various contests. You can also read the RVF’s ACTION! blog to stay up to date on what’s happening in the Canadian Francophonie. Come join the celebration!

Information about Marc-André Descôteaux and the categories

This is great stuff! Thank

This is great stuff! Thank you!