Posted on
November 25, 2019
Written by
Marc-André Descôteaux (About the author) 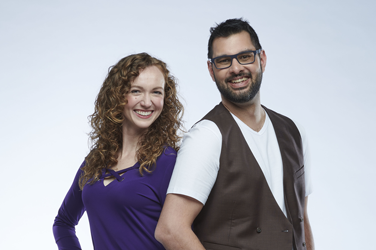 From April 15 to June 21, Laura Lussier and Shaunpal Jandu travelled across Canada, meeting Canadians from coast to coast as part of the Bonjour my friend! tour. The purpose of the tour? To mark the 50th anniversary of the Official Languages Act and to generate dialogue on linguistic duality and its future in our country.

We spoke with Laura and Shaunpal, the two tour ambassadors, to learn about their cross-Canada odyssey.

Our Languages blog (OLB): Before we get into the tour, we’d like to get to know you a bit better. Where are you from, and what do you do for a living?

Laura: I’m from Saint-Boniface, Manitoba, where I still live, together with my husband. I’m a stage and television artist: an actor and director. I’m also a certified professional coach; I work with young creators and aspiring professionals who want to reduce their stress and increase their level of success.

Shaunpal: I was born in Montreal but lived in Toronto for a number of years, and now I live in Ottawa. I’m a graphic designer and a consultant with the federal government.

OLB: How were you chosen to participate in the tour, and what made you decide to accept the invitation?

Laura: It was the Deputy General Director of the Canadian Foundation for Cross-Cultural Dialogue who persuaded me to take part in the project! I accepted the invitation because linguistic duality has always been a part of my life: I had one French-speaking and one English-speaking parent, and I live in a minority community. I find that living in two languages has enriched my life tremendously. I was curious to find out how other people experienced linguistic duality and how they envisaged the future of our two official languages.

Shaunpal: I was approached by the Executive Director of the Foundation. He really wanted me to participate, as I represent a voice that isn’t often heard, despite the fact that many Canadians share my reality. I’m a first-generation Canadian who was enrolled in French programs, despite my parents’ not knowing any French themselves.

I really wanted to be a part of a project that gave Canadians the chance to discuss Canada’s two official languages, and I was eager to hear their thoughts on linguistic duality.

Laura: The words “linguistic duality” weren’t even part of my vocabulary before the tour. It’s a concept that’s relatively new to most Canadians, me included. Out west, we mainly talk about bilingualism. Now I understand the difference between these two concepts, and we spent a large part of the tour increasing people’s awareness of linguistic duality. What I came to realize during the tour was how linguistic duality has led to the diversity that exists in Canada today.

OLB: While travelling across Canada, you had an opportunity to meet a lot of people from different communities. Overall, what are people saying about linguistic duality and bilingualism?

Shaunpal: The majority of Canadians strongly believe that having two official languages is a good thing. Even if they don’t know or use both languages themselves, they believe that they are a strong part of the Canadian identity.

OLB: From what you observed, what are the main points that the different official language minority communities have in common?

Laura: We all feel a sense of pride. We all come together for cultural and artistic events. We find creative ways to incorporate French into our daily lives. In spite of the distance between Francophone communities outside Quebec, they have close ties to one another and share a strong feeling of solidarity.

Shaunpal: I also found that there is a strong link between the French language and French culture. That was new for me. I know three languages, and my parents know even more, so the link between language and culture was never apparent to us. To me, language was always just a vehicle for communicating with other people.

OLB: During the tour, you must have heard a lot of views on linguistic duality. Was there a story that you found particularly inspiring?

Laura: One man I met in Edmonton was so convinced of the value of French that he and his wife began learning French as soon as they decided to have children. Now the whole family speaks both official languages!

OLB: Your cross-Canada tour lasted almost 70 days. You must have discovered places that will remain engraved on your memory forever. Was there one spot that made a lasting impression on you, and why?

Shaunpal: Canada! This was my first time travelling across the country from coast to coast. It’s so hard to pick a single place. From the beauty of the Rockies to the majesty of the sky in the Prairies to the warmth of the east coast, our country is incredible.

What a wonderful adventure the ambassadors had on their cross-country tour! We hope you had a chance to meet them. Now, over to you: why do you think linguistic duality is important?

A translator and reviser for about 20 years, Marc-André Descôteaux has been interested in the web since the days of the 2400-baud modem. Insatiably curious, he is passionate about culture, travel and language.

Linguistic duality is to live

Linguistic duality is to live two cultures simultaneously. These two cultures, the English speaking and the French speaking, are like two overlapping circles, with the things we have in common in the overlapping section. When you travel in Europe and say you are Canadian, everyone expects you to speak French. Our bilingualism is sadly more famous abroad than at home. I have had a wonderful time learning to navigate in those overlapping circles of linguistic duality. I hope more and more Canadians will do the same.