Posted on
July 6, 2020
Written by
Ève Lyne Marchand (About the author) 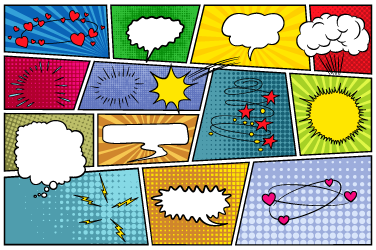 When I was in elementary school, teachers encouraged us from early on to read books without illustrations. Maybe that’s why I quickly turned my attention away from comic books—that is, until I met avid fans of this pictorial (of course) but also narrative form of expression. That’s when I realized that I had missed out on a lot of books. Today, I’m redeeming myself with this little primer on what some call “the 9th art.” Please feel free to add to it in the comments below.

Autography: The process of transferring a drawing onto a lithograph stone. This process was used in 1833 to publish what is considered to be the first Western comic book, Histoire de monsieur Jabot, by the Swiss writer Rodolphe Töpffer.

Award: Awards that are open to comic book writers include those conferred by the Angoulême International Comics Festival in France, as well as the Bédélys and Bédéis Causa awards, which recognize French-language comic books published in Quebec and abroad.

Comic book: Also known as comic or comic magazine (bande dessinée américaine in French). This is a format that was made popular in the United States in the 1930s. The story often centres on a hero. Who hasn’t heard of Batman, Archie or Charlie Brown?

Fanzine: A fanzine is an independent magazine produced for and by fans, hence the name “fan-zine.” Fanzines come in many forms, including comic book form. Creators use them as a platform for protest or as a stepping stone to becoming professionals. In fact, did you know that Superman got his start in a fanzine?

Graphic novel: A graphic novel is a comic that is viewed as “serious” and is free from the constraints of the traditional formats. A Contract with God by Will Eisner is considered the first ever graphic novel. Maus, by Art Spiegelman, was the first graphic novel to win the Pulitzer Prize. The Les libraires website (opens in new tab) (in French only), which represents about 100 bookstores in Quebec, the Maritimes and Ontario, lists works in this category by various authors, from Marjane Satrapi to Emil Ferris and Guy Delisle.

Hergé: Tintin’s creator is an important figure of the Franco-Belgian comic book genre alongside Franquin (Gaston Lagaffe), Peyo and Delporte (the Smurfs), Morris (Lucky Luke) and Goscinny and Uderzo (Astérix and Obélix).

Ideographic character: A symbol that represents an idea or an emotion. For example, a heart (for love), stars (for pain) or a lightning bolt or a string of characters like “#?&!” (for anger).

Inking: As I’m sure you know, a drawing doesn't just automatically appear! Inking is the application of ink to the drawing, after the pencil sketch has been made but before colour is applied. Each of these steps can be done manually or digitally.

Lettering: Anything that’s written: narration (or narratory blocks), dialogues, onomatopoia, some ideographic characters. Some graphic novels don’t contain any lettering, including The Arrival by Shaun Tan, which won the prize for best comic book at the Angoulême International Comics Festival in 2008.

Manga: A manga is a Japanese comic book often sketched in black and white, and read from right to left. The background art is very simple, and the characters are front and centre on the page. The action is presented from many different perspectives, and a variety of techniques are used to express emotions, including onomatopoia, ideographic characters and the size of the eyes.

Neologism: A word that is invented to create a stylistic or novel effect. Can you imagine the world of comics without “corksmurf,” “gaffophone” or “kryptonite” (to name just a few)?

Onomatopoeia: Meow! Meow! Sniff! Glug Glug! Toot! Toot! These interjections are used to express sounds in words. Did you know that sounds are not written in the same way from one language to another? Read the French version of this post, and see for yourself.

Panel: Also called a “frame.” A panel is a box with a drawing inside of it. Warning to foodies: when all the panels are the same size, we get a “waffle.” Some comic books, like mangas, have asymmetrical panels; others don’t have any panels at all, like some graphic novels.

Z is for Zorglub: The title of one of the stories in the Spirou and Fantasio series (published by Éditions Dupuis), included because I just had to finish with the letter “z”!