Posted on
November 23, 2020
Written by
Ève Lyne Marchand (About the author) 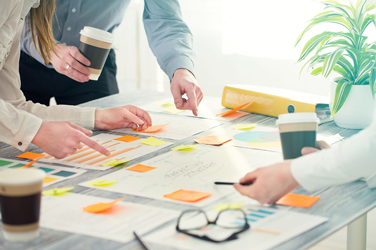 In my previous blog post entitled “Comment parler Scrum” (in French only), I explained that Scrum is an agile framework. “Agile” seems to have become quite the buzzword. While reading, writing, translating or revising a document, you may have asked yourself if a team, method or management style could be described as “agile.” Or perhaps you’ve wondered about the origins of the term “agility,” which everyone, especially managers, is becoming increasingly fond of.

The term “Agile” (with a capital “A”) refers to a project management philosophy based on 12 principles. These principles are set out in the Manifesto for Agile Software Development, an online document that has been translated into many languages.

The manifesto has been signed by 17 software development experts, who wanted to find a way to replace traditional (and often rigid) project management processes, hence the use of the word “Agile.”

Agile principles are based on people, products, cooperation and adaptation, rather than processes, documentation, negotiation and planning.

To be or not to be agile?

Can we use the adjective “agile” to refer to a project management style that is based on the principles of the manifesto?

In specialized language, more specifically in the fields of computer science and management, the Grand dictionnaire terminologique (available in French only on the Office québécois de la langue française website) uses “agile” as an adjective within the term “agile methods,” and TERMIUM Plus® (available on the Language Portal of Canada website) classifies the term “agile” as an adjective.

In a general sense, the adjective “agile” describes a person or thing that is physically deft or flexible. In a figurative sense, “agile” is defined as being able to think quickly. Merriam-Webster gives the example of “an agile mind,” and other reputable English dictionaries provide examples such as “agile organization,” “agile leader” and “agile intelligence.”

Therefore, you can indeed talk about “agile methods” and “agile management.”

It’s also interesting to note that the adjective “agile” has the same meaning in both English and French. The authors of the manifesto, who are all Anglophones, thought this adjective would convey their concept well. Remember that they chose this word in contrast to the word “rigid” (as in “rigid management framework”).

Upper-case versus lower-case “a”

As we saw earlier, the term “agile” is included in both specialized and general language tools. Whether to use the noun or adjective depends on the context.

The term “Agile” (with a capital “A”) is an official designation. It refers specifically to the product development philosophy described in the manifesto. For example, you could say “the Agile philosophy” or “an Agile consultant.”

The adjective “agile” (with a lower case “a”) is used in general language to establish a relationship between a common noun and the Agile philosophy. For example, you could say “agile development” or “agile framework.”

So there you have it! I hope this overview helps you to express these concepts with agility. Let me know in the comments below if you know of any other resources on this topic.