Posted on
August 3, 2020
Written by
Steeves Gourgues (About the author) 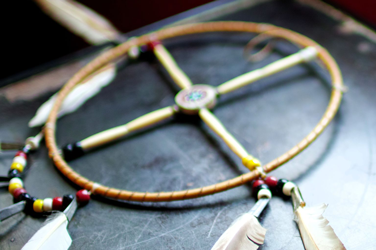 The United Nations General Assembly declared 2019 the International Year of Indigenous Languages. UNESCO sought to highlight the fact that half of the world’s 6,000-some languages are in such a precarious state that they could disappear by the end of the century if nothing is done to preserve them. According to the 2016 Statistics Canada census, over 70 Indigenous languages are spoken in Canada.Footnote 1

Many of these Indigenous languages are endangered.Footnote 2 Others, including Wendat, have been extinct since the 19th century. However, in the last 15 years or so, efforts have been made to revive and reclaim this language. In 2006, researcher Megan Lukaniec began the meticulous work of reviving the language of her ancestors. The biggest challenge is recapturing the pronunciation of words, which isn’t always correctly transcribed in Wendat. Lukaniec was able to use materials such as recordings of traditional songs etched on wax cylinders in the early 20th century by the founder of Canadian anthropology, Marius Barbeau. Nearly 900 words have painstakingly been recovered over the last 12 years.Footnote 3 Because of this work, singer Andrée Levesque-Sioui, who introduces young Huron children to their ancestors’ language at the Wendake primary school, can now explain all the words in the songs she teaches.Footnote 4

Efforts to preserve ancient documents written in Indigenous languages have taken on a whole new dimension. Bibliothèque et Archives nationales du Québec (BAnQ) finished digitizing 146 centuries-old Indigenous-language books, which were added to the Memory of the World Register by the Canadian Commission for UNESCO in 2018. The digital books involve three main language families: the Iroquoian languages (Iroquois, Huron-Wendat, Mohawk and Onondaga), the Algonquian languages (Algonquin, Abenaki, Cree, Innu-Montagnais, Mi’kmaq, Nipissing and Ojibwe) and the Inuit languages (Inuktitut). The collection consists of primers, syllabaries, grammar guides, dictionaries, glossaries, reading books and other manuals.Footnote 5 The age of the documents presented various challenges, which had to be overcome for this project to be completed.Footnote 6

Richard Compton is an associate professor at the University of Quebec at Montreal, holder of the Canada Research Chair in Knowledge and Transmission of the Inuit Language, and co-author of a dictionary on the Inuktitut dialect Inuinnaqtun. In an article published in Québec Science in January 2020, Compton was quoted as saying that linguists cannot save a language—it takes a community and a generation that are willing to speak the language and pass it on. According to Mr. Compton, part of the solution is to restructure institutions, so that Indigenous people can study and work in their language. The Truth and Reconciliation Commission of Canada also recommended that Indigenous-language courses and programs be developed at all levels of instruction.Footnote 7

Ojibwe is one of the Indigenous languages spoken in Canada that is benefitting from these revitalization efforts. Officially launched in April 2019, the Waking Up Ojibwe – Anishinaabemodaa project aims to train future teachers in the Rainy River district (west of Thunder Bay) and help people learn the language. The fruit of a collaboration between the Seven Generations Education Institute, the Rainy River District School Board, Say It First and 10 First Nations in the region, this project will be implemented over the next 7 years. The program brings Ojibwe not only into daycares and schools but also into family homes.Footnote 8 In 2017, a scientific video was made in English and French about the research being done by the International Institute for Sustainable Development – Experimental Lakes Area on the effects of mercury contamination on freshwater ecosystems. The video was recently translated into Ojibwe with the help of members of the Nigigoonsiminikaaning First Nation.Footnote 9

In 2013, a project was launched at Otapi High School, in the community of Manawan. The participating students wrote articles in Atikamekw about their culture and history to be published on Wikipedia. And in doing so, they enriched the language by creating new words. The communities of Wemotaci and Obedjiwan later worked with the Manawan community on this project. By 2019, the Atikamekw version of Wikipedia had over 1,000 articles.Footnote 10 It was through the addition of Atikamekw to Wikipedia that this culture came to be documented, both in writing and in images that are now preserved in digital format. The Atikamekw version of Wikipedia was officially launched on June 21, 2017, to mark National Indigenous Peoples Day.Footnote 11 At least two other Indigenous languages spoken in Canada have made their debut on Wikipedia: Cree and Inuktitut. Others, such as Mi’kmaq, Montagnais, Mohawk and Ojibwe, are in the incubation phase, a preparatory step before they are added to the encyclopedia.

Much remains to be done to save such a rich oral and written linguistic heritage. Only time will tell if these revitalization efforts have truly paid off.

My sincere thanks to Ms. Ha-Loan Phan, of Wikimedia Canada, for her help.

Deer, J. (2019, December 10). ‘A way to keep our language alive’: How the Atikamekw Nation uses Wikipedia to promote its language. CBC.

This is an incredibly

This is an incredibly important subject and initiative. Wishing success to all who are striving to save and revitalize Indigenous languages.