Laugh and learn with holiday songs 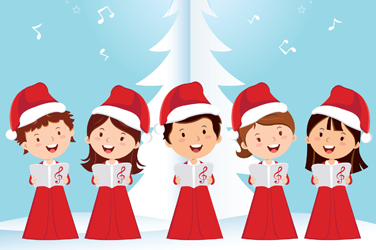 During the holidays, delve into the large repertoire of popular carols and festive songs, and have fun in your second language! Here are a few simple suggestions.

Songs to warm up

Many holiday songs will appeal to beginners because they contain few words. In fact, some of these songs are peppered with onomatopoeia! For example, most of the lyrics in “L’enfant au tambour” (“The Little Drummer Boy”) consist of “pa ram pam pam pam.” While I love this song, one detail has always seemed far-fetched to me: the little boy falls asleep on his drum! What an uncomfortable place for a nap! But the easiest song to remember is undoubtedly “Feliz Navidad,” which consists of two English sentences and two Spanish sentences, sung in rotation.

A number of Christmas songs have surprising lyrics. For example, there is the fun and flavourful “La tourtière”! Written in 1954, this culinary glossary of sorts has us dining around the world. But the ingredients for the eventual meat pie are odd and unappetizing: “des machins” (thingamajigs), “des p’tites affaires” (doohickeys), “toute la salière” (a shakerful of salt) … and “des jarretières” (garters)!

And then there are all the songs with potential gift suggestions. In “Lettre au Papa Noël,” a little boy writes to Father Christmas, telling him that he wants a bicycle, a ball, a hoop, a sailboat and a set of carpenter’s tools. Realizing that he may be asking for too much, he says that he’ll be happy no matter what he gets. He’s a kind-hearted child, though, and asks Father Christmas to save the best toys for a less fortunate boy. Now that’s the holiday spirit!

In English, the award in the wish-list category goes to the popular carol “The Twelve Days of Christmas.” An excellent memory exercise, this carol lists the gifts a suitor offers his sweetheart. In 12 days, he gives her what amounts to the contents of an aviary (doves, hens, geese and swans) and dozens of musicians and dancers. It’s enough to scare off even the most smitten fiancée! Besides, who gets up one morning and says: “I’ll give her a partridge in a pear tree; she’ll be thrilled!”?

Songs to improve your diction

As a Francophone, I find “It’s Beginning to Look a Lot Like Christmas” challenging. Despite years of singing in a choir, I feel that there are always a few too many syllables in the first line! But if lilting is your thing, how about “Voilà le Père Noel qui nous arrive”? In this traditional Quebec folk song, La Bolduc’s technical mastery of tongue-twisting nonsense syllables like “Tam ti-la-li, ti-la-di de-li-de-lam” will have you dancing a jig in no time!

The most courageous French learners can give “La danse à Saint Dilon” a try. If you like free diving, you might be able to keep up with the singer-songwriter. Gilles Vigneault belts out the eight verses in just two minutes, without gasping for air!

A closer look at lyrics

Having the lyrics in hand is useful, because our ears sometimes deceive us. Who hasn’t heard someone sing “Dawning now our day of peril” instead of “Don we now our gay apparel” in “Deck the Halls”? But even when we understand them, lyrics can be surprising. For example, nobody who has felt the force of a Canadian blizzard is likely to exclaim “Vive le vent!” (“Hurray for the wind!”) in winter. Hurray for the English “Jingle Bells!”

Do you enjoy these songs but feel uncomfortable singing along? If so, try the Language Portal’s English quiz and French quiz on carols that you’re sure to know.

How about you? What are your favourite tunes? Which songs have become traditions at your holiday gatherings? Which ones make you smile?

Information about Marise Guay and the categories