Celebrate Halloween with a twist!

Posted on
October 17, 2022
Written by
Marise Guay (About the author) , Language Portal of Canada 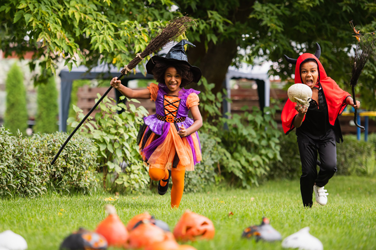 The pandemic has forced us to rethink certain traditions. In my family, in recent years, Halloween has become one of those holidays that we celebrate with the people in our own social bubble. Rather than heading out into the neighbourhood to trick-or-treat, my kids and their friends are treated to a scavenger hunt with lots of fun challenges, including some language related ones! Here are a few games for you to try (especially with candy as a reward)!

A witch reads a story about a magic potion and tells the children the ingredients needed to make it. The children have to listen carefully and memorize the ingredients so they can collect as many of them as possible afterward. You can adjust the list of ingredients according to the children’s ages and what you have around you: for example, a crumpled maple leaf, a small pine cone or a shiny rock.

With some play dough, cardboard, crayons and lots of imagination, the creepy candy store can open its doors! The kids form two teams. First, they make some scary treats with the play dough. Then, they have to come up with names for them that suggest foul flavours and harmful effects. They write the names on pieces of cardboard, then arrange everything on a table and welcome the judges, who must award first prize to the person who created the most horrifying treat. Last year’s winners were “radioactive licorice that gives you the giggles” and “acidic trash taffy that melts your teeth.”

Have you ever played Hangman? Players have to guess a word one letter at a time. If they guess a letter that isn’t in the word, their opponent draws a part of a stick person hanging from the gallows. Players must find the word before the diagram is completed. For Halloween, find a place to create an “executioner’s square.” The game can be played in the driveway with sidewalk chalk, on a large window with erasable markers, etc. Each word is a clue to the next task: “find,” “spiders,” “yard,” “witch.” Have your neighbour dress as a witch and wait for the kids in the neighbour’s yard, where spiders are hidden.

The witch’s yard is infested with peculiar spiders! Some have green cards, others have red ones, and each card has a syllable written on it. The children have to find the critters, then put the syllables together to solve the “spider scramble.” The green cards form two-syllable words for children who are just learning to read (for example, zom-​bie, can-​dy or mon-​ster), while the red cards form words with three or more syllables (for example, ce-​me-​te-​ry, ske-​le-​ton or Frank-​en-​stein). To make the game easier, syllables that fit together can be written in the same colour.

These games can also be adapted to the children’s second language. Naturally, the scavenger hunt should involve tasks that allow the children to stretch their legs. Jumping over pretend snakes made out of ropes, running a relay race with a witch’s broom and playing hopscotch while pretending that some of the squares are molten lava are great ways for them to burn some energy. At the end of the hunt, when the children look under a pile of leaves, they find a box containing bags of candy with their names on them—and a new toothbrush, of course!

In your family, what are your kids’ favourite language games? And which ones do you like best?