jimchab and his passion for the Francophone culture

Posted on
March 25, 2019
Written by
Mélanie Guay and Julie Morin (About the author) , Language Portal of Canada 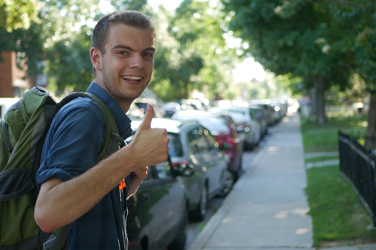 Born in Drummondville, Quebec, Jimmy Chabot, or rather “jimchab,” as he prefers to be called, is a young video blogger and radio host who is becoming increasingly well known. In the last few years, he’s caught people’s attention mainly through his own personal projects, including preparing the submission to the 2015 Kraft Hockeyville contest on behalf of a small town in Northern Ontario, reporting for Radio-Canada and—his most publicized project—hitchhiking across Canada at 23, carrying very little money and speaking French only.

jimchab’s story is inspiring. As a child, he was bullied for many years because he stuttered. His speech impairment isolated him somewhat from others. Speech therapy yielded slim results … until the day he was handed a mike and asked to be the in-arena announcer during a hockey tournament. Something really clicked at that point. He says he then worked hard to calibrate his voice, and today he is very proud to be able to express himself easily.

We had the opportunity to interview this very determined young man who is passionate about the French language.

Our Languages blog (OLB): What pushed you to take jobs in Kapuskasing, Northern Ontario, and in Winnipeg, Manitoba, so far away from Drummondville?

jimchab: Radio is a bit like hockey: you have to start in the minor leagues. I had just finished a training program in radio broadcasting, and Quebec radio stations wouldn’t give me a chance. So I signed a contract in Kapuskasing and got my start there. And that’s when I first realized just how little our history classes in Quebec high schools taught us about the Francophonie outside Quebec. They never taught us about prominent figures like Marie-Anne Gaboury, Louis Riel or Georges Forest! Who were these important symbolic figures who shaped our history? I wanted to learn more, because I felt that I was missing an entire facet of my culture.

OLB: You’re described as someone who loves Manitoba. What do you love specifically about this province?

jimchab: After my first contract in Ontario, I found a job in Winnipeg, and I explored Manitoba. I fell in love with the Franco-Manitoban culture, and I immediately felt at home! I realized that there was a strong, proud Francophone community in Manitoba and that there were countless opportunities there, with the many events taking place, concerts, radio, particularly in Saint-Boniface.

I’ve travelled a lot in Canada, and people think I’m bilingual, but I’m not. I still live my life in French.

Although I’ve only been living in Manitoba for two years, I now consider myself a Franco-Manitoban. I’ve found a new identity! Franco-Manitobans stand together in solidarity to defend the French language with pride and conviction. They hold a lot of events so that the language remains very much alive. To give you an example, this year, we’re celebrating the 50th anniversary of the Festival du Voyageur. We’re talking about a celebration that’s about as big as the Carnaval de Québec. It’s like Christmas in February! The event brings together not only Francophones, but also Anglophones who cross the bridge to party with their Francophone neighbours and take advantage of the Festival to practise the French language.

OLB: Since you were bullied for many years, one would think that you’d have taken up bullying as your cause. Instead, you’ve chosen to devote yourself to promoting the Francophone culture in Canada. Why?

jimchab: I compare the bullying I experienced in primary and secondary school to what’s happening with the French language. I feel that Francophones outside Quebec are made fun of because of their accents and their differences.

We need to help the French language flourish, showcase it and give Francophones credit. For example, when a singer like Mélissa Ouimet is a contestant on a popular TV singing competition, why not introduce her as a Franco-Ontarian? Why not talk about her song “Personne ne pourra m’arrêter (La résistance),” which made her famous on social media and got thousands of hits? We have to seize every opportunity to promote the French culture in Canada.

OLB: Has travelling across the country speaking only French changed your perception of Canadian Francophonie?

jimchab: Francophonie exists everywhere. I visited many places and found Francophones. They’re in Yukon, in the Northwest Territories, and even in Inuvik. Everywhere I went, Francophones were there to welcome me. When you meet Francophones from outside Quebec, you’re treated like family. They welcome you with pride, and they’re always there to help you.

There’s one province in particular where I noticed glaring needs, and that’s in British Columbia. We have to hit the emergency button! Many Francophones, mostly Quebecers, have moved to British Columbia. And, already, the children of these adults who’ve moved out West hardly speak French anymore. The children respond to their parents and even to French text messages in English; this issue arises both orally and in writing. And they’re just the second generation. In my opinion, we have to act fast and invest in outreach programs to preserve the French language in this province.

OLB: And to wrap up, what can we expect from jimchab in the coming months?

jimchab: I’m working on several projects to continue supporting the Francophone cause in Canada. I give talks in Francophone high schools, including in Ontario, and I focus on the advantages of being different. Life in the school yard happens in English. In their eyes, it’s not “cool” to learn and speak French. So I talk to them about the advantages of being able to speak French once they hit the job market, in a province where English is the official language. I also tell them that what might be ridiculed today will become an incredible asset for them later on.

As you can see, I continue to spread my Francophone pride. And I invite you to follow me on Facebook and Twitter to see what’s happening in the coming months. 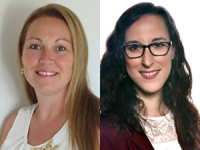