Even in a headwind, never give up on your dream

Posted on
March 2, 2020
Written by
Mélanie Guay and Julie Morin (About the author) , Language Portal of Canada 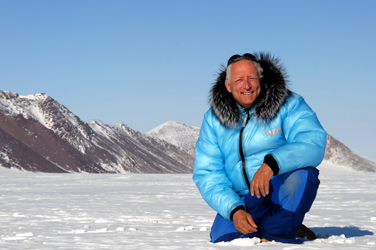 Born in Rimouski, Quebec, in 1953, Bernard Voyer is famous for having climbed the highest peaks on each of the seven continents and for having completed numerous expeditions to the Arctic and Antarctic. An internationally renowned explorer and speaker, he does everything possible to raise awareness for the cause of environmental protection.

We invite you to discover this poet in love with language and winter, who is one of the spokespersons for the 22nd edition of the Rendez-vous de la Francophonie, which runs from March 1 to 31, 2020.

Opening up to the world while staying true to oneself

“Our language is like a painting, a canvas that represents us, a musical composition, a photograph. Everything passes through language: the part of us that is rational, scientific, bohemian, nostalgic. We surrender ourselves totally with our words, we open ourselves up to others, and that allows us to express who we are.” From the outset, Bernard Voyer offers us this very inspiring image of what language means to him. He speaks French and English, and learned some Berber expressions while travelling through northern Morocco and Algeria. He emphasizes the importance of learning other languages while remaining true to oneself: “Learning another language doesn’t mean neglecting one’s own; it means opening up to the world, while preserving one’s roots and language.”

The explorer is proud to be one of the spokespersons for the Rendez-vous de la Francophonie, whose theme this year is the environment, one of his passions. “During all my expeditions, I have always had something fundamental in my backpack. Something that weighed nothing, yet was weighty nonetheless: my origins. I could walk in the Sahara Desert while remaining a Quebecer, a Canadian born in Rimouski. I always tried not to become someone else.” In his opinion, it’s essential to remain true to yourself, to preserve your authenticity, your language, your accent, all that you stand for wherever you travel on the planet. “For me, the Rendez-vous de la Francophonie is about walking around with your backpack and feeling a sense of pride. Receiving this invitation from the Canadian Foundation for Cross-Cultural Dialogue is a great gift!”

The environment and its teachings

From a very young age, Mr. Voyer was made aware of the environment by his father, who was then an agricultural engineer. “My father used to tell me that we shouldn’t pollute the earth that feeds us. And I have to say that this simple sentence guided my life. My respect for the Earth is boundless.”

Mr. Voyer’s curiosity and passion for the environment have taken him to the four corners of the globe. His experiences in the course of his travels have given him a great deal of wisdom. “During my first expeditions, when I had to cross a stream, it bothered me to get my shoes wet. I was worried about my expensive expedition gear.” But his life took a turn while he was in Morocco, making a 4000-metre ascent. In the distance, he heard a voice singing, waiting for its echo before continuing with the melody. He came closer until the sound became clearer. “Finally, I saw a young Berber girl carrying an amphora full of water on her back. She was wearing sandals made of recycled tires. We greeted each other and went our separate ways.” Mr. Voyer was stunned. “She was glowing! It was like a slap in the face. I said to myself, ‘Bernard, in your comfort and your modernity, you’re pretty pitiful.’ That encounter changed my life. I stopped seeing water as an obstacle; today, I respect it.” He concludes by emphasizing that the important thing is not so much to get from point A to point B, but to reflect on the journey in order to gather life lessons.

Over the years, inspired by his friend Gilles Vigneault, a Quebec singer-songwriter, Bernard Voyer has become more interested in winter and cold: “Gilles was the first to present winter to me in such a positive light, and it’s no coincidence that he wrote the preface to the French edition of my book Aniu: From Snowflake to Iceberg.” This ode to nature is both scientific and poetic, and it helps readers better understand the movement of glaciers. His texts reflect an ecological awareness of the accelerated melting of glaciers and the destruction of fragile ecosystems. For the author, “the richer the language we use to describe the environment, the more success we will have in convincing people, with sound arguments, that there is an urgent need to act. All this is linked, once again, to language.”

A head full of projects

When asked to participate in projects, Mr. Voyer continues to support expeditions such as those organized by Les Offices jeunesse internationaux du Québec. He is also a spokesperson for the organization’s zero carbon objective program (in French only), which aims to reduce the environmental impact of youth mobility projects. The idea is to make young people aware of the carbon footprint of their travels and encourage them to participate in green projects, such as tree planting.

This science communicator who specializes in the polar climate continues to give exhilarating lectures in which the audience is transported by his amazing stories. “I would like the people who attend my lectures to understand the importance of taking time in life. That’s what I call ‘going one step at a time.’ Develop your patience so that you give dreams time to take shape.” To illustrate this idea, he concludes with an anecdote. “One day, I met a man in Quebec City who recognized me. He told me that many years before, as a high school student, he had attended one of my lectures on my Antarctic expedition. After the lecture, he got me to sign his bicycle helmet as he explained his dream to me. He wanted to ride his bike across Canada. I signed the helmet: ‘Even in a headwind, never give up on your dream.’ All these years, that message has inspired him, and he realized his dream. This man is now an architect, and the helmet is proudly displayed in his office. I didn’t think that when I faced the storm in Antarctica, I was going to inspire someone with that sentence. What we do and what we say is meaningful to others.”

Visit Bernard Voyer’s website to keep up to date with this poet-explorer and his expeditions.