Be daring: Speak in your second language

Posted on
February 11, 2019
Written by
Caroline Bowden (About the author) 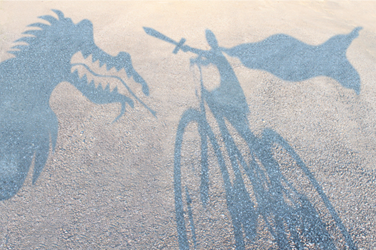 My name is Caroline, and I’m a linguistic hypocrite.

Perhaps I’d better give that confession some context.

I’ve been an English as a Second Language teacher for over 17 years. Every day, I work with public servants in the National Capital Region to help them achieve their linguistic goals and that much sought after language profile.

I have four very simple rules of language learning for my students: try your best; be brave; be able to laugh at yourself; repeat all of the above often. Sounds relatively easy to do, right? That is, until it came to my own efforts to speak my second language, French.

I’m also an actor, and I’ve worked at various times over the past two decades as a tour guide and broadcast journalist. So, to say that I know my way around a good turn of (English) phrase is pretty much a given. English phrases, yes. But French? Now that was a very different matter, indeed.

My current acting gigs are with an Ottawa-based, site-specific theatre company. “Site-specific” means that we perform in historic houses, museums and other sites, and take on the roles of various real characters from the history of those sites. Our plays always incorporate some sort of mystery that can only be solved with the help of the audience, which moves with the actors throughout the site. We have a script, but we also rely a lot on improvised dialogue with each other and our audience members.

I find this type of theatre exhilarating, at least in English. The idea of trying to do this in French had me running scared. Bunny-in-the-headlights terrified. What if I forgot my lines and couldn’t come up with something else to say? What if an audience member said something to me and I blanked utterly or didn’t understand? What if? What if? The thoughts swirled around my brain on a crazy hamster wheel.

Rationally, I knew that this is what every single second language learner experiences. Goodness knows I had experienced it often enough while living in Montreal. Having a good friend tell me that I was the only person she knew whose French had actually gotten worse the longer I lived in La Belle Province hadn’t exactly helped with my confidence, either.

I set about my task like a general planning a battle. I learnt my French lines studiously, even going so far as having a recording of them playing on a repeat loop as I slept (no, seriously… it helps!). I asked a bilingual friend to converse with me in French and suggest suitable “improvised” lines my character (an elderly, cantankerous psychic medium) could say.

The word came down the day before we opened: “Twelve tickets have been sold for the four o’clock show on Thursday.” It was game on.

The cast met in the early afternoon of the show for one last rehearsal in French. I’d already asked the two veteran actors if they could please keep the improvisation with me to a minimum and stick to the script, just so I didn’t get lost.

Things went well in the rehearsal. The senior actor gave us all the pep talk, and then it was time to get into costume.

Standing in the “wings” before my entrance, I eavesdropped as my scene partner interacted with the audience, finding out where they were from.

And I promptly forgot everything I had to say after the first line. My eyes must have been as huge as saucers as I looked pleadingly at my scene partner for help. Bless her heart, she picked up the next line, fed me what I needed to say, and we were off, with no looking back.

The audience members were ready to be entertained and, more importantly, willing to be part of the story. They played along, were forgiving of any mistakes I may have made, and were enthusiastic and giving.

How can I describe that feeling of relief and accomplishment as we took our final bows? It was the first of three shows that day, and the adrenaline rush sustained me through the rest of the afternoon and evening.

The confidence I felt after that show continued as, weeks later, I found myself in Edinburgh, Scotland, chatting with a laid-back family of four from Lyons at the train station. Admittedly, some of what passed between us was Franglais, but we had such a good time talking about the places we’d seen and things we’d done on our individual holidays that it didn’t matter.

So, what have I been trying to say here? Well, to quote Shakespeare from the infamous “Scottish play” (you know which one, and actorly superstition prevents me even from writing the title), when it comes to using your second language out and about in public, you have to “screw your courage to the sticking place.” Or as Nike would put it: just do it. Yes, you’re going to make mistakes, but you’ll be so glad that at least you tried.

Have you had the courage to use a language you’re not entirely fluent in? How did the experience turn out? I’d love to hear about it!

Caroline Bowden is an Ottawa-based second language teacher and actor. Thanks to her work with the Live History theatre company, she has found herself linked theatrically to Prime Minister Mackenzie King, playing his psychic in a production at Laurier House on one occasion, and his mother in a performance at Woodside National Historic site in Kitchener, Ontario, on another.

Thank you for sharing this

Thank you for sharing this story. I found it very inspiring. In my experience, there's knowing French, and then there's knowing French--one being the collection of rules and grammar, and the other being the words that flow from one's mouth in unscripted situations. As any French learner is aware, these two types of 'knowing' are so very different and seem to emerge from two different places in the brain. It seems, from my experience, that oral expression is inherently linked to emotion, in some way. It's so neat to see how you took an activity that brings you joy and used it to develop your French language skills. I think you have wonderfully revealed a key secret to learning a second language.

I want to learn French

I want to learn the French language.

Perfectionism doesn't serve language learners well.
What I find helpful are a steady and gradual series of "immersions" in situations where you are somewhat comfortable.

This was an interesting

This was an interesting article. I am currently taking French language training (part time) at work. As I live in an English-speaking environment, speaking French when I am not in class is a challenge.