The French legend of King Arthur

Posted on
May 25, 2020
Written by
Steffan Landry (About the author) , Language Portal of Canada 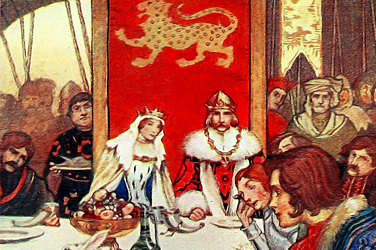 You don’t need to be a Middle Ages history buff to have heard of the legend of Camelot. I’m referring, of course, to the adventures of King Arthur, Queen Guinevere, Sir Lancelot, Sir Percival, Sir Ywain and other knights. The tale of Camelot and the Knights of the Round Table has been told and retold in countless works, from novels and plays to movies and TV programs.

So picture me walking into a CEGEP course on the history of French literature (a very long time ago), familiar with various versions of the legend of King Arthur: Richard Gere as Lancelot, Monty Python and the Holy Grail, and Bugs Bunny’s “Sir Loin of Beef” (which still makes me laugh). On the prof’s reading list, there was an excerpt from Roman de Brut, by Wace. I greatly enjoyed reading the stories of Arthur, King of England, but one question plagued me: why would a French author write about the legend of a British king?

Later in my studies, I learned that Roman de Brut was not an exception. In fact, most of the accounts written about King Arthur and his court were penned in what would later become French. This mystery followed me all the way to university, where I took a class on the history of the French language. Here is what I learned.

The Battle of Hastings

After the Norman Conquest, a large number of Normans settled in England. They spoke what we call today the Franco-Norman language (an early form of French). As the language of the court, French became the official language of England and remained so until the 14th century.

The light goes on

I finally got it! When he wrote his works in the 12th century, Wace was an English subject writing in the official language of his country: French. Mystery solved!

I don’t know about you, but ever since I learned this little bit of history, I see references to the legends of King Arthur in a whole new light. Earlier, I talked about my soft spot for Bugs Bunny’s “Sir Loin of Beef.” How about you? What are your favourite depictions of King Arthur and his court? 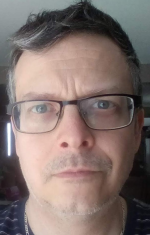 Steffan Landry graduated from the University of Sherbrooke with a degree in professional translation. He has worked for the Translation Bureau since 2010 as a translator, a terminologist and a language analyst.

I would like to point out that the language in England was never French. French was only the language of the aristocracy in the English royal court after the Norman conquest of 1066. The majority of the people spoke English; this is why I do not agree with the statement made that the French language was the mother tongue in England. To this day, the monarch's motto on the royal coat of arms is still “Dieu et mon Droit” meaning “God and my Right.”

Thank you for your comment. I agree that French was never the “maternal tongue” of England. I used the term “official language” because French was the language used by William I, the court and the aristocracy.