Cométique: Beyond the cosmetics of a street

Posted on
November 28, 2022
Written by
Josée Marie-Lise Robillard (About the author) 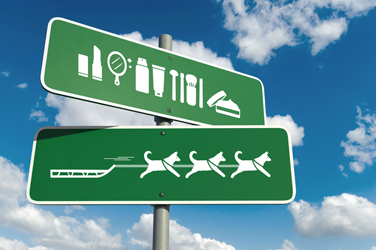 The new confused kid in town

When I first arrived in Havre-Saint-Pierre, I did what many people do when they move to a new town: I went for a walk to try to get my bearings. During my walk, I came across a street named Cométique. The word looked odd to me, and my first impression was that someone had forgotten the “s” in cosmétique (“cosmetic” in English).

Several weeks went by, and the missing “s” bothered me every time I passed that street. How could the municipality have let such an obvious mistake go uncorrected? I couldn’t believe the City had made such a glaring error on one of its signs.

A word missing from my vocabulary

One day, I decided to investigate the apparent typo. I started by looking in a reputable French dictionary. To my great surprise, there was no sign of the word cométique, so I turned to the Internet, and here’s what I found out.

According to the Office québécois de la langue française’s Grand dictionnaire terminologique,Note 1 a cométique (or “komatik” in English) is a long, low Inuit sled that’s pulled by one or more harnessed dogs and used for travel over hardened snow or ice. It’s also noted that the word comes from the Inuktitut language and is sometimes used to refer to a toy sled or a team of dogs.

Usito, a French dictionary published by the University of Sherbrooke,Note 2 explains that, etymologically, the word comes from the Inuktitut word qometiq.

Despite its resemblance to the word “cosmetic,” cométique clearly has nothing to do with beauty products. I had no idea!

I think street names are often a reflection of the local socio-historical context and culture. Such is the case with Cométique Street in Havre-Saint-Pierre on Quebec’s Middle North Shore. While there aren’t any Inuit communities in the area, there are quite a few Innu villages. Also, the first non-Indigenous people in the area, the Cayens, used komatiks to get around in winter. This means of transportation was once a way of life for the inhabitants of the region.

Using this term as a street name honours the heritage of these two peoples. It also helps to educate people like myself who are new to the area and who know little about the local history and culture. At the same time, it helps with our social integration.

As I mentioned before, cométique wasn’t in the first dictionary I checked. Personally, I hadn’t ever seen or heard the term cométique before arriving in my new hometown. Nowadays, most people seem to just say traîneau à chiens (“dog sled”) instead. However, among the older generations who grew up here, this regionalism remains quite common for describing this particular mode of transportation.

Have you ever looked up the meaning of a street name you thought was odd?

Information about Josée Marie-Lise Robillard and the categories