Indigenous geographical names and the power they hold

Posted on
June 17, 2019
Written by
Jean-Luc Fournier (About the author) 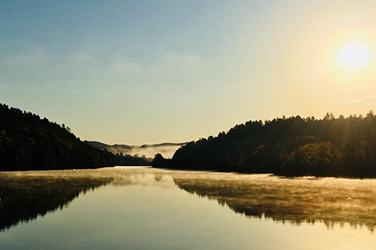 A simple word capturing the beauty of a cascade, a phonetic sound detailing a narrow passage with obstacles to surmount, an elaborate term describing with the utmost accuracy a series of bluffs absorbed by the immense mountainous landscape … these are some examples of key characteristics and information that can be found in Indigenous geographical names.

Geographical names are an integral part of our everyday conversations. They serve as landmarks and provide key reference points to help us navigate many geographical landscapes. They work as memory aids and occasionally testify to intimate relationships with the land. The discipline that studies geographical names and their origins, meanings and use is referred to as “toponymy.” Toponymy stands at the crossroads of several disciplines, such as geography, etymology, linguistics and history.

Indigenous geographical names are unique, given the level of insight, sophistication and exactness of the information they carry. This rich, detailed information originates from the worldviews, cultures and languages of Indigenous nations. The following examples of place names are of Anishinabemowin and French origins.

The characteristics of Anishinabemowin geographical names

The Anishinabemowin language is spoken by the Anishinaabeg/Anishinabeg people (Algonquin, Nipissing, Mississauga, Ojibwe, Chippewa, Saulteaux, etc.). This macrolanguage and its many dialects are classified by linguists as part of the Algonquian language family. It has 18 consonants, three short vowels and four long vowels.

Words for place names can sometimes be quite intricate, often expressing in a word what is contained in a sentence in languages like English and French. Anishinabemowin is characterized as a polysynthetic language: one in which words are composed of several morphemes. (Morphemes are the smallest grammatical units in a word.) Polysynthetic languages typically have long "sentence-words" with a considerable amount of detail.

The “river with a rippling current at its mouth”

Indigenous geographical names carry local knowledge and often depict specific traits of a location with great precision. They can convey particular realities of the natural world that many people are unfamiliar with. This is the case for the Madawaska River in Ontario. “Madawaska” is said to be derived from the Anishinabemowin word Mata-aushka, meaning “river with a rippling current at its mouth,” which used to describe quite accurately the mouth of the Madawaska River where it meets the Ottawa River. The characteristic highlighted in the name is no longer visible on the river, as colonization brought considerable changes, including the construction of several hydroelectric generating stations and water control dams.

Indigenous names sometimes capture local histories and have the ability to present the cultural heritage inherent in the place they identify. Place names often commemorate the lives of long-time residents or families, prominent individuals, or significant events that have marked our collective past. An example of this is the Amable du Fond River, flowing north and draining the highlands of Algonquin Park in Ontario. The river is named after Amable Jon Bon [Jawbone] Du Fond, an Algonquin “Indian” who occupied the area, according to information recorded by Catholic missionary Père Simonet in 1865.

In the early 1800s, Du Fond journeyed to Mattawa, “the confluence of two water streams,” and explored the surroundings in search of good hunting and trapping grounds. Over the years, Du Fond travelled extensively throughout the area, using the river that now carries his name. He and his family established several winter campsites for hunting, trapping and fishing. Du Fond finally settled close to where the Ottawa River meets the Mattawa River, in what would become the village of Mattawa in the 1850s. He was highly respected and esteemed amongst his contemporaries.

The moose that jumped over the rapids

Beyond the practical function they serve, Indigenous place names recount stories of the land in a unique way and provide valuable cultural and historical perspectives. The Rapide de l’Orignal, located on the Rivière du Lièvre in Mont-Laurier, Quebec, is a good example. The original Anishinabemowin name for the rapid was Monz Pàwitig, and the literal French translation is Rapide de l’Orignal. The latter officially appeared on maps in 1885, around the same time settlers were beginning to arrive and establish themselves near the rapid. The designations Monz Pàwitig / Rapide de l’Orignal originated from a legend of the local Anishinabeg.

During the winter season, the Anishinabeg roamed the shores to hunt moose and deer, which they exhausted by pursuing them in the snow. According to legend, a moose chased by hunters made an exceptional leap of 30 metres by jumping from one bank of the river to the other above the rapids. This spectacular leap became a myth perpetuated by the local Anishinabeg and later told to the voyageurs and French Canadian families who settled in the vicinity. This story was preserved and carried on through the oral tradition of the Anishinabeg and was quickly adopted and popularized by the newcomers.

The value of Indigenous languages 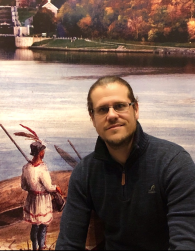 Jean-Luc Fournier is a toponymist and historical researcher, and a dynamic and effective communicator with an array of professional experience working with Indigenous organizations, institutions and community groups. He holds a degree in Indigenous studies and environmental studies from the University of Ottawa. In 2017, Jean-Luc joined the Geographical Names Board of Canada (GNBC) Secretariat at Natural Resources Canada as a toponymy analyst, working closely with representatives from federal, provincial and territorial naming authorities across Canada.

I love this description, and

I love this description, and it makes logical sense.