Franco-Ontarians: A formidable force to be reckoned with

Posted on
August 8, 2022
Written by
Arwa Ahmed (About the author) , Canadian Heritage 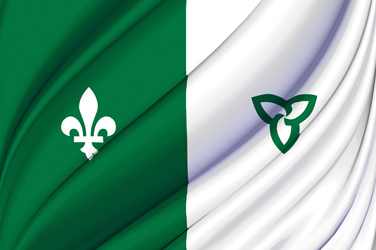 In 2015, Ontario celebrated the 400th anniversary of Samuel de Champlain’s exploration of Ontario and the 40th anniversary of the Franco-Ontarian flag. Champlain's sojourn in the province served as a springboard for the Francophone community's cultural, social, economic, and political accomplishments. The significance of the French community’s presence in Ontario cannot be overstated. The French were the first Europeans to explore the area and establish themselves, as well as the first Europeans to form alliances with Indigenous peoples. The French also laid the groundwork for the fur trade in Ontario by identifying the region's natural and commercial riches. They are clearly an important part of Ontario's history. Today, most Franco-Ontarians live in eastern, northeastern, and central Ontario, although small Francophone communities can be found throughout the province.

Regulation 17: A threat to the French language in Ontario

Despite their vibrant culture and long history in Ontario, Franco-Ontarians have faced numerous threats to their survival. In 1912, the provincial government enacted Regulation 17 (opens in new tab), which was meant to assimilate the province's Francophone minority community into the province's Anglophone majority. Regulation 17 was a major threat to the French community in Ontario because it stipulated that English was to be the language of instruction and communication in schools across the province. Essentially, French was barred from being used as a language of instruction. Regulation 17 was received with fierce opposition across French Ontario, but especially in Ottawa. Protesting, Franco-Ontarians established their own educational system. The uproar eventually triggered a national controversy, and it was seen as a Canada-wide crisis, especially for other language minorities in Canada. Even Anglophones who were part of the Unity League of Ontario opposed Regulation 17. In 1927, 15 years later, the government stopped enforcing Regulation 17, and it was not further renewed. Some Franco-Ontarians say Regulation 17 still has residual effectsFootnote 1, despite the numerous years since it was revoked in 1944.

Although the fight to defend the rights of Franco-Ontarians is far from over, this community has proven to be a powerful force to be reckoned with.

Government of Ontario. (2019 February 5). Profile of the Francophone population in Ontario – 2016 (opens in new tab).

University of Ottawa. (2019 September 24). “What does being Franco-Ontarian mean to you? (opens in new tab)” Gazette.