The advantages and disadvantages of a global language

Posted on
July 26, 2021
Written by
Alexandre Chemla (About the author) 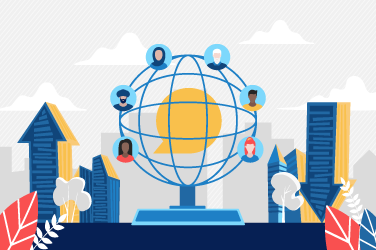 I was reflecting upon the topic for my blog post when an idea popped into my head. Last summer, I was going over old photo albums, records, passports and such with my family. And then I stumbled across something that really struck me. My mother showed me my maternal grandfather’s work card, which he obtained in Germany. After World War II, my grandfather, who was the eldest in his family, decided to leave his village in Calabria, in the south of Italy, and search for work elsewhere in Europe. This German work card surprised me because there was no English translation in sight! In fact, the text was translated into French. I had become so used to English being the global language, especially after feeling its omnipresence while travelling abroad, that I forgot that French once occupied that same global position. This got me thinking, “What are the advantages and disadvantages of a global or universal language?”

Two years ago, my family and I travelled to Argentina, where we watched the Buenos Aires soccer team play a game. As a futbol fanatic, I remember talking in English with this Argentinian university student after the game. We had an amazing conversation about Argentinians’ passion for soccer compared with that of Canadians. Even though we were both from different countries, and English was not our native tongue, we were able to connect culturally through our ability to speak the current global language.

With the rise of globalization and neo-liberalism since the 1970s, an unprecedented amount of international trade and business between different countries has been carried out. The reality is that in order to buy from or sell to a business partner from another country, you need to communicate effectively and accurately. Thankfully, a global language eliminates the communication barrier, promoting greater international trade and opportunities for economic growth.

As I was doing research for this blog post, I came across a very interesting index called the “Language Barrier Index (LBI).” In short, the LBI “quantifies international language barriers by measuring the dissimilarity between the main languages of trading partners.”Footnote 1 Although it involves a very complicated mathematical equation, it speaks to the advantage of having one world language. Using the LBI, Lohmann found that “language barriers are a significant deterrent to bilateral trade. A 10% increase in the Language Barrier Index can cause a 7% to 10% decrease in trade flows between two countries.”Footnote 2

Disadvantage 1: Presents challenges for non-native speakers in the sciences

There are bigger disadvantages of having a global language than the one I’m going to discuss in this section. However, I wish to explore this one because it has a direct impact on the field I’m currently studying in. Since I’m in environmental studies, scientific literature is vital to any lab, research project or assignment in my classes.

Getting a scientific paper published is a long (about one year) and difficult task that requires many steps. Having a global language has allowed scientists to access a vast amount of literature from around the world, but it has also presented significant challenges for non-native speakers of English. You might be thinking, “They’re scientists. Why are adequate English language skills needed by scientists to get their papers published?” Well, scientists need to clearly communicate their findings, conclusions and methods, and for some non-native speakers, that can be strenuous. Scientists who want their work to be globally recognized need to attend English conferences or discussions and read English scientific papers. According to an article published in The Atlantic, 80% of scientific papers were in English.Footnote 3 Furthermore, the article notes that “a journal published in a language other than English must at the very least include English abstracts.”Footnote 4

According to a BBC article, in this last century, some 400 languages have become extinct – about one language every three months – and in the next century, 50% of all remaining languages will become extinct.Footnote 5 Needless to say, this is worrying, because simply put, an extinct language means the loss of a unique culture. People who speak a global language have greater opportunities for employment, education and overall success. Therefore, some minority language speakers believe that learning to speak a global language will benefit them financially.Footnote 6 Furthermore, with globalization, our cultures are ever increasingly interconnected, catalyzing the takeover of minority languages by a global language.

In conclusion, a global language has its advantages and disadvantages. Its strong points include facilitating communication between different cultures and paving the way for greater international trade between countries. Its drawbacks are the challenges it creates for non-native speakers in the sciences (especially when it comes to publishing scientific literature) and its contribution to the extinction of minority languages. The question remains: Will English continue as the world’s global language in this century and beyond, or will another language take its place?

There is a global language

There is a global language and it works well. It is called Esperanto.