Canadian, British and American: It’s all English, but the spelling is different

Posted on
October 13, 2020
Written by
Virginia St-Denis (About the author) 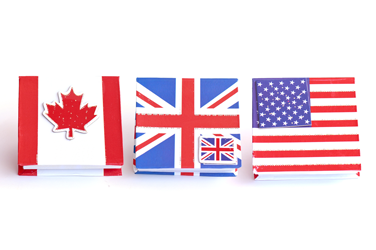 I’m a proud Canadian. I grew up in the Niagara (Falls) Region, so I watched and listened to Toronto and Buffalo television and radio stations. I was still in elementary school when I became aware of the differences between Canadian and American English.

“Canadian English is a variety of English in its own right,” Oxford’s Guide to Canadian English Usage (1997) reads. “In the past, however, Canadians seeking information or advice on their language had to look to either British or American dictionaries and usage guides, neither of which reflected the distinctiveness of Canadian English.”

“Because Canada has its own political, cultural, historical, and geographical realities, it has its own words to describe those realities…. dictionaries inevitably describe and reflect the language and culture of the country in which they are edited,” reads the Canadian Oxford Dictionary. “Canadians need a dictionary that defines the words used by Canadians and also records how Canadians (not the Americans or the British) pronounce and spell words.”

Sheila Ethier shared a great blog post called “Why Canadian spelling is different.” In it, she looked at the people at the root of those differences, including England’s Samuel Johnson, America’s Noah Webster and Canada’s Sir John A. Macdonald.

In this post, I wanted to share some of the ways in which our Canadian hybrid spelling patterns are different from those of our British and American cousins, so readers like you know what to be on the lookout for.

The 10 categories of spelling variations listed in Editing Canadian English: A Guide for Editors, Writers, and Everyone Who Works with Words are based on Robert Ireland’s Canadian Spelling: An Empirical and Historical Survey of Selected Works (1979 York University PhD dissertation).

“The spellings of colour and centre, in particular, have in recent years come to be greatly (even passionately) preferred over the corresponding American variants; indeed, some Canadians view them as cultural touchstones, important for their symbolic role in distinguishing Canadian from American discourse,” Editing Canadian English reads. “A 2010 study (Kevin Heffernan et al.) found that colour and centre ‘seem to do more than their share of the ideological work’ in this regard. While there are several hundred words with standard British and American versions, ‘reference in the media to spelling variation and Canadian identity seldom go beyond discussing these two examples.’”