Behind the scenes at Parliamentary Debates

Posted on
August 31, 2020
Written by
Katey Thompson (About the author) 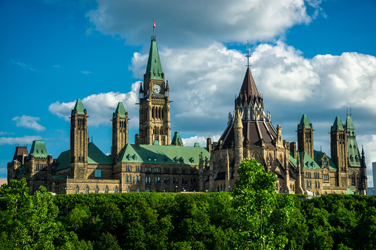 Did you know that the debates of both the House of Commons of Canada and the Senate of Canada are published in documents commonly known as the Hansard? And did you know that a team of translators and revisers work all evening—and sometimes all night!—to make sure that the transcripts from each chamber are ready for publication in both official languages by 6 a.m. on the day following the debate? As a translator at Parliamentary Debates, I’m here to give you the inside scoop.

Parliamentary Debates in a nutshell

The Parliamentary Debates team is a group of about 40 translators and revisers at Public Services and Procurement Canada’s Translation Bureau who translate the written transcript of everything said in the House of Commons and the Senate.

On an average Tuesday, the House of Commons and the Senate might sit for a combined average of 11 to 12 hours. This means that there is an average of about 100,000 words to be translated on any given Tuesday in session. That’s like translating a Harry Potter novel every single Tuesday night!

Members of Parliament (MPs) are generally allocated between 10 to 20 minutes per speech on a given topic. These speeches are broken down into smaller chunks so that they can be translated, revised and submitted on time. This means that one MP’s speech on a particular bill may be translated by four or five different translators. It’s up to us, as a team, to communicate with each other to standardize the vocabulary or expressions used throughout a speech.

The Parliamentary Debates team starts its day right around the time that most people are heading home from work. By 4 p.m., the House of Commons has been sitting for a few hours, and the members’ words have been transcribed and edited in their original language. That’s where we come in.

One of the most common questions I get is, “What time do you finish work?” The only answer I can give is “when the work is done.” The House of Commons—and, to a lesser extent, the Senate—will occasionally have extended debates, which means that an additional four or five (or sometimes more) hours of debate need to be translated. On nights like these, it’s not unheard of for a Debates translator to translate more than 5,000 words so that our team can meet our strict deadline.

The House of Commons and the Senate have relatively fixed schedules, although that’s always subject to change. What looks to be a normal Tuesday can quickly become a very late night! Although we sometimes know about an extended debate a day or even a week in advance, debates can be very unpredictable: we have no idea how long a debate will last or how much will be spoken in French or in English.

Translating the Hansard: Typical Day in the House of Commons

More facts about the House of Commons

What parliamentarians talk about

The topics covered in the House of Commons and the Senate are quite varied. One day, the House might be debating tax treaties with foreign countries, while the Senate is debating an amendment to the Criminal Code. The next day we might be translating about railway regulations and the national anthem. Because of the way our parliamentary system operates, we have just enough time to start learning about one bill before we move on to another one. We may not see that original bill again for weeks, or sometimes longer.

House of Commons debates can be challenging to translate! Debates translators often find themselves looking for the mot juste to translate a regionalism, a centuries-old quote, a pun or an expression.

So, the next time you see a clever Question Period quip on the news, take a minute to think about how you might say that in another language!

What an insightful and

What an insightful and informative article on the very challenging work these dedicated translators and revisers do and the services they provide!

This was a fascinating and

This was a fascinating and insightful read. It was cool to learn about how many people it takes to get such a volume of information to us Canadians to make Senate proceedings more transparent. Our hardworking translators take on a complex task, divide it up and coordinate in a mind-boggling way, and still manage to get it done so quickly and with such high quality. Awesome job, and thank you for supporting bilingualism in Canada!

Katey, I’m so impressed with

Katey, I’m so impressed with the work you do and the description you provided here! Very cool!

Terrific post, Katey! Thanks for the straightforward inside scoop!

Wow - you are truly the

Wow, you are truly the unsung heroines and heroes of Canadian democracy. What interesting and important work. Thank you!

WOOW that was a really

WOOW that was a really amazing insight!!! Thank you so much for sharing!

As an English student who is very interested in politics, I use the translation feature in the House of Commons to help me understand debate (and learn French!). Therefore, I really appreciate all that you are doing!!!!