COVID-19 and learning a second language: Embracing the unknown

Posted on
January 5, 2021
Written by
Maria Kalsatos (About the author) 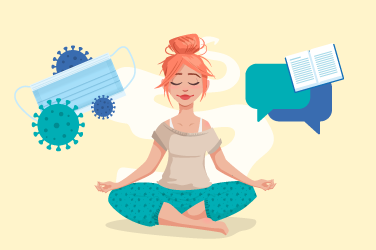 There's no question that the COVID-19 pandemic will continue to globally impact the world we know for the foreseeable future. Plans have been changed, schools are online, offices are closed, and the landscape is changing daily. These strange times bring me back to when I was living in Montreal, scared to speak in my second language and failing miserably most of the time. What do COVID-19 and learning a second language have in common? Patience for the unknown and, most of all, compassion (for yourself and others).

When I moved to Montreal to pursue my master's degree, I remember feeling really anxious about my French-language skills. Even though I knew that Montreal was a very bilingual city (compared to Quebec City, for example) and that, even if I spoke zero French, I would still be able to get by (tourists do it all the time), I felt as though I had something to prove.

I did French immersion all throughout middle and high school. Then, I did my undergrad in French literature. So after speaking, writing and reading French for over 10 years, you'd think I'd be fluent – wrong! After all that time, I still felt as though I couldn't really speak French. When I say this to people who don't speak French at all, they look at me puzzled, but French immersion didn't guarantee bilingualism in my case. I may have received a diploma at the end of my four years that said “Congrats! You're bilingual,” but the reality of the matter is that I wasn't fully prepared to speak French in the real world. Even when I was writing 10-page essays during my undergrad degree on Baudelaire, Flaubert and Michel Tremblay in French, I still felt like a poser. On top of that, I didn't have any real-world conversation skills, and even worse, I didn't know the nuances of Quebec French vocabulary or slang.

I didn't fully realize the differences between Quebec French and French from France until I got to Montreal – and there are quite a few of them. What's more, my classmates who were raised in Montreal were actually bilingual; they switched between the two languages with ease. And after a few months, I couldn't shake the feeling of being a fraud.

My parents came to Canada from Greece when they were small children. My mother used to tell me stories from her childhood in which she'd come home from school crying because she didn't understand what the teachers were saying, and she felt that she couldn't properly express herself. Hearing these types of anecdotes makes me feel guilty. There were many occasions during my time in Montreal when I remember struggling to piece together a simple sentence in French, giving up, then just saying it in English, assuming the other person would understand. What about the people (like my mother) who didn't have the option of defaulting to English if they didn't know what to say? How did they get by? This made me think of all the immigrants who come to Canada and speak English or French as a second or third or fourth language and how this must feel for them (my struggles pale in comparison). I realized that I shouldn't be so hard on myself. Instead, I should be thankful for the opportunity to be able to practise my French, and just keep trying. Learning a language takes time, and when you make a mistake, you just have to embrace it and keep going. Patience is key.

Taking it one day at a time

In these unprecedented times, it's important to practise the art of compassion towards yourself and others. Just like when you're learning a second language, you have to be patient with the process. You'll have moments of uncertainty and anxiety, and that's okay. You won't be able to prepare for every situation, and sometimes you might not know exactly what to say or do.

Obviously, the COVID-19 pandemic is more frightening than speaking in a second language, but the underlying message can be applied to both situations. Nobody likes uncertainty; it can be scary feeling out of control and not knowing what's going to happen next. Unfortunately, this is a part of life. You make plans, they fall through for reasons out of your control, and then you make new plans. In these strange times, how are you embracing uncertainty? 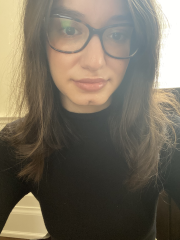 Maria Kalsatos holds a master’s degree in translation from Concordia University in Montreal. She is currently based in Toronto.